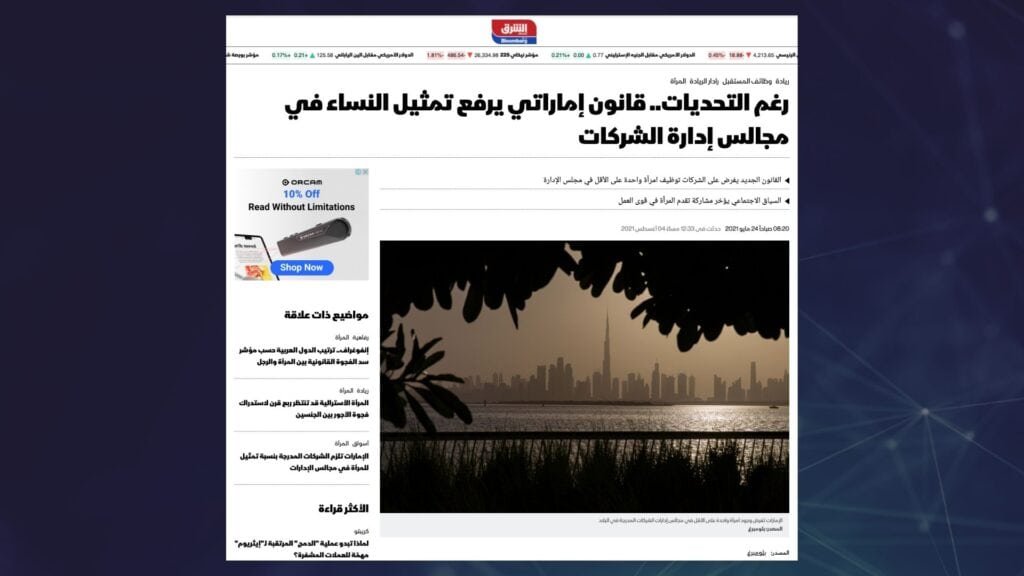 Reporting on the Emirates Securities and Commodities Authority (ESCA)’s mandate to put one woman director on every UAE listed board, Asharq Business Bloomberg says that women have only taken four new seats at listed companies on the two main UAE stock exchanges in the two months since, with 96 percent of positions held by men.

The publication interviews Fatima Hussain, the only woman on the board of Dubai-based logistics group Aramex, who says the slow progress is evidence of the persistence of “traditional cultural roots”.

Women, especially those from conservative backgrounds, typically avoid positions that might require staying out late or interacting with male colleagues, said Ms Hussain, an Emirati who is also the chief human capital officer at TECOM Group, part of Dubai Holding Group.

Ms Hussain, who joined Aramex’s board of directors after the position was advertised in a local newspaper, told Asharq Business Bloomberg: “I interview many people, and sometimes the candidate has to ask permission from her parents to accept the job offer because there are many men in the workplace.”

In a written response to questions, the Emirates Securities and Commodities Authority (ESCA) told Bloomberg that penalties for companies that fail to comply with the new law could range from warnings to a fine, or even a referral to the public prosecutor.

Companies will be required to disclose board representation in annual reports, a spokesperson added.

Since the announcement of this law, women have been appointed to the boards of directors of Emaar Properties, the largest real estate developer in Dubai, Du, Dana Gas and Abu Dhabi National Oil Company (ADNOC), Asharq Business Bloomberg reported.

Aurora50’s co-founder, Diana Wilde, told Asharq Business Bloomberg that in the US there is at least one woman on every board of directors within the S&P500 index, with women occupying more than 34 percent of corporate board positions in the UK’s FTSE350 Index.

But she added, “We’re actually starting from a very low base.”